Many assumed for a reconciliation when Jon Voight was spotted leaving the same hotel where his daughter Angelina Jolie is staying. 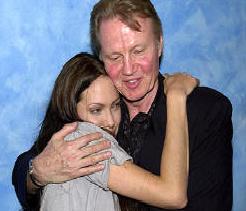 The actress has not allowed Jon Voight to see her kids since 2002, when he made a comment that she needed to get help for something he called “serious mental issues”.

After the actor was spotted coming out of New York’s swanky Waldorf Astoria hotel with a huge smile on his face, many hoped that Angelina Jolie had a change of heart and would allow her father access to the kids.

It appears those are false hopes. A report indicated that Jon Voight was at the hotel to see his goddaughter. Despite the close proximity, there was no meeting but Brad Pitt has reportedly pushed for a meeting.

Earlier tabloid reports cited insiders that claimed that Brad Pitt really believed that the four kids would be better off if they could not only meet their grandfather, but get to know him. But those same reports indicated that Angelina Jolie shut Brad Pitt down and in no uncertain terms told the “Babel” actor to mind his own business. .