Angelina Jolie, who graced the cover of Britain’s Harper’s Bazaar, talked about her often wild and controversial past, saying: “I don’t walk around feeling I need to apologize or explain myself.” 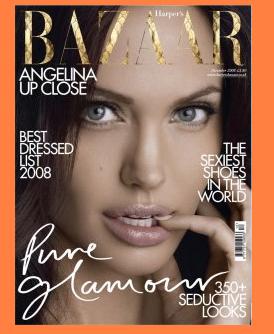 The 33-year-old actress, who was featured as the magazine’s December issue cover story titled “Angelina Up Close,” did not consider herself belonging to the mainstream, despite her impressive humanitarian work as UNHCR Goodwill Ambassador and founder of the Jolie/Pitt Foundation.
She described herself as “still, at heart – and always will be – just a punk kid with tattoos.”

About her films, she played the characters that she can identify with, adding: “I tell stories that are about the type of woman I’d want to meet. The type of woman where I think, even if it’s silly characters I’ve played, like in Tomb Raider, there’s something about her that will be fun for my daughters to see one day.”

She explained the reason why she exposed her kids to guns and knives through games and toys as she revealed: “My kids play video games. I let them play with toy soldiers. We don’t take war and violence lightly, but we don’t hide it from anybody. We say, ‘Mommy and daddy have movies where we play these characters, but there’s real death and violence in the world.'”

Her recent film “Challenging” was accepted very well at this year’s Cannes Film Festival. The film, which was expected to earn Angelina Jolie an Oscar nomination, was released nationwide on October 31 and grossed a modest $9.35 million over its opening weekend.