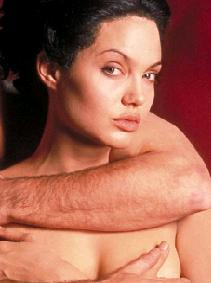 She revealed, “They were trying to put the IV in me, and I began laughing so hard, with tears rolling down my face. I was out of my mind.”

And the fits of laughter didn’t stop there, the actress also laugh while she breast-fed Shiloh, adding “I was on the phone with my mom, who was also in the hospital. We were laughing because we were both under the same assumed name, and we both had been given a dose of morphine.”