When fashion designer Malcolm Harris got a call from Angelina Jolie, he thought he was being fooled – so he hung up. 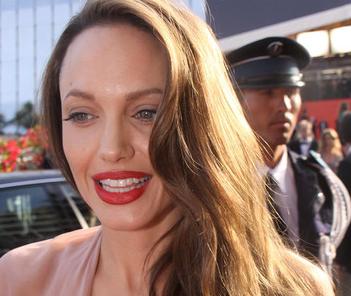 “I actually hung up on her twice,” Malcolm revealed. “I thought it was a friend who usually plays pranks on me.”

But instead, it was the actress and humanitarian, who wanted to support the designer’s United Nations-friendly fashion. The actress was aware that a portion of the proceeds from each sale of his clothing goes toward the U.N.’s refugee effort, a cause Angelina has worked for as a Goodwill Ambassador.

As previously reported, the star will speak out on the subject this week, joining Anderson Cooper on CNN for World Refugee Day on Thursday.

And Angelina will have no shortage of clothing options to choose from.

“She bought it in three colors, hot pink, coral and black,” Malcolm said of his “One Dress,” a wrap that can be worn many different ways.

The affordable piece offers Hollywood style for only $225. But when will fans see Angelina in one of her new dresses? Malcolm himself would love to find out.

“I wish I knew,” he said. “I’d probably camp out in her house to get the photo!”