Angelina Jolie, who previously rumored to proposed a marriage proposal to partner Brad Pitt, graces the cover of German Cosmopolitan magazine for its January 2009 issue. 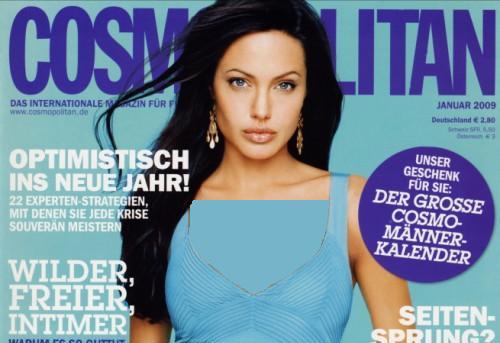 The “Wanted” actress talked about her family, acting career and new film “Challenging.”

How do you find time for your family, acting career and your commitment as a UN ambassador? The actress replied: “Well I do take my time outs. And most of all I do receive support from Brad. We are a good team. That is important to me and gives me strength.”

She continued: “This is a beautiful idea, but I cannot sit quietly while others die of hunger and children. My commitment for the United Nations I do not want to abandon. The play has no greater priority. In February, I still turn a movie, then I suppose one years off.”

How can you survive each day without a nervous breakdown? She answered: “I’m very disciplined. I have a balanced diet and among other things I do Pilates. If I’m fit I feel more comfortable and I do have a lot more energy.”

In Changeling you play the role of a mother whose son disappears without a trace. That’s not a easy role. She added: “Absolutely. Just the idea of such a possibility made me go completely crazy. Initially, I wanted to cancel it. But the strength and self abandonment of this woman made be accept the role.”