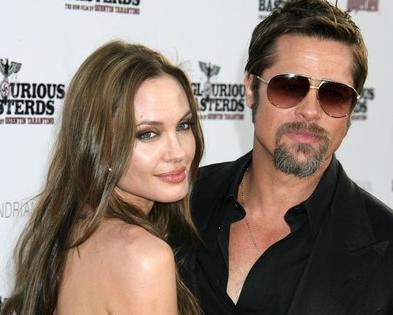 Pitt was keen to be the center of attention as he arrived on the red carpet at Grauman’s Chinese Theatre in Hollywood; but Jolie, sporting a leather cocktail dress by Michael Kors and four-inch stilettos, literally hogged the spotlight.

“As soon as Angelina stepped out of their car, she left Brad behind her,” an onlooker told In Touch Weekly magazine.

“She signed autographs for fans by herself and didn’t seem to care where he was.”

An insider added that Brad “wanted to look perfect for the premiere.

“He even went to the dermatologist and dentist this month.

“But it looked like Angelina stole Brad’s thunder intentionally. She had the dress delivered that day and wore the hottest shoes from Christian Dior. She wanted to make sure that everyone knew she was sexy again.”

The Tomb Raider star also chatted with journalists. “But Brad looked so mad he kept pulling Angie away from interviews, he seemed annoyed that she was talking so much,” the onlooker adds.