Angelina Jolie is insecure about her breasts and “saggy” stomach. 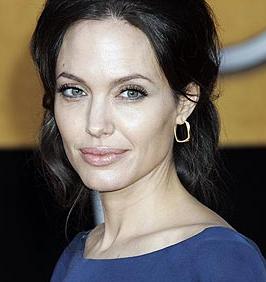 The “Changeling” actress, who raises six children with partner Brad Pitt, is said to be struggling to come to terms with her post-baby body following the July 2008 birth of twins Knox and Viv.

A source revealed: “After giving birth to [daughter] Shiloh nearly three years ago, Angelina was so overwhelmed and happy that her body was the least of her worries. She was still happy with the way things looked and felt.”

The source continued: “But since having the twins, she’s found it impossible to ignore the insecurities that keep rising to the surface. The biggest issues for her are her breasts – which she says are smaller and not as firm as they were before she breast-fed three children – and her stomach, which she’s described as ‘saggy’. She’s frustrated because no matter how much exercise she does, there’s still some skin and wrinkles.”

The source dished the scoop: “Brad won’t hear her put herself down. He listens and tells her to do what she needs to do to make herself happy. However, he also tells her he likes her body and thinks she looks more beautiful than ever. Brad adores the fact they’ve created life and she’s nurtured it with the body he loves.”

The source explained: “If Angelina complains that she looks old and tired compared to two years ago, Brad tells her to rest and take some time out. She has a tendency to take on too much and try to be perfect, even when he reassures her that she can’t be a superwoman.”

The source added: “They’ve talked about adopting more children, which is something Angelina wants to do – even though she’s already tired looking after six. The problem is that, although Brad loves her, it’s Angelina herself who needs to learn to love her own new body, just like millions of other moms around the world.”