Angelina Jolie was spotted out on the town in New Orleans and she was partying it up at what they classify as a “dive bar.” 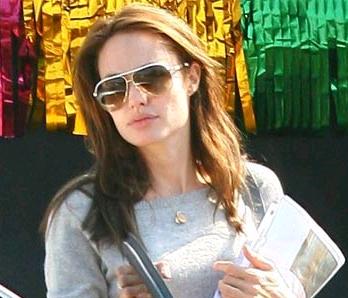 Grace, a bartender who worked in “The Abbey”, revealed that the group “had more than a few drinks.”

The story notes that the bar is in New Orleans’ French Quarter. A witness pointed out that the “Good Shepherd” actress flirted with her bodyguard Francis and Brad was nowhere to be seen.

One patron, who saw Angelina out with Francis and a “group of friends” in early December, revealed, “She was giggling like a schoolgirl and kept touching his arm and laughing at everything he said.”

The report claims that the friends who the actress has been spending time with — she hangs out with her bodyguards and speaks with her ex-husbands, Billy Bob Thornton and Jonny Lee Miller — are almost exclusively male, which bothers Brad, 44, too.

“Their roles are somewhat reversed,” a friend of the couple remarks. “Brad is the stay-at-home mom caring for the children, while Angelina is the dad who goes out drinking with the boys.”

A pal added, “He would spend every waking moment with Angelina, but she apparently does not feel the same. He invites her everywhere he’s going, but she doesn’t return the favor.”