Angelina Jolie, who was previously rumored to be pregnant again, shopped for toys with her eldest son Maddox in the French Quarter of New Orleans on Sunday, November 30. 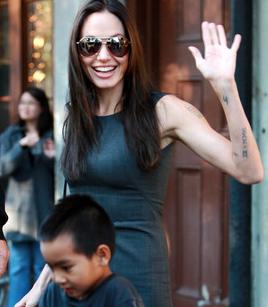 The 33-year-old actress and her seven-year-old adopted son Maddox were seen in New Orleans as they got the Little Toy Shop all to themselves when they entered as the owner closed the store for others.

The latest issue of In Touch magazine has pronounced Angelina Jolie three months pregnant, but her rep has denied the report.

Angelina Jolie and partner Brad Pitt are # 5 on the Forbes first annual list of Hollywood’s top earning couples, having collectively earned $34 million between June 1, 2007 and June 1, 2008.