The Jonas Brothers, who composed of Kevin, Joe and Nick, could not wait to celebrate Christmas this year at their new Dallas home. 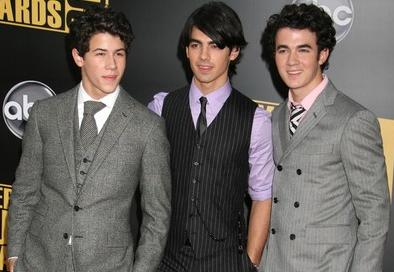 The brothers were seen with their dad Kevin Sr., mom Denise, 8-year-old brother Frankie and Nick’s dog Elvis in an L.A. studio. One of their treasured traditions is helping their mom with her cookie-making, which is a “five-day event.”

On his favorite Christmas tree ornament, Nick, 16, recalled the times of being a theater kid as he revealed: “I love the ones I have from when I was in (a Broadway production of) A Christmas Carol, especially the Ghost of Christmas Past. Those are good memories for me.”

Perhaps the Lion King is the basic choice of ornament for 19-year-old Joe as he explained: “Ever since I was little, that was the one I couldn’t wait to put on the tree every year,” he explains. Another tradition that has stuck in the Jonas household: wearing their pajamas inside out on Christmas morning. “We think if we wear them inside out, then it will snow.”

When it comes to decorating the Jonas family tree, perhaps it is considered as a serious business for Kevin, 21, as he said: “It’s a huge ordeal in our family to wrap the Christmas lights around the tree properly. My dad is kind of, you know, very, very particular.”

And for the oldest JoBro, his tree accessory of choice is “the Baby Boy ornament. It was one of my first.”

Frankie, who is known as the Bonus Jonas, revealed: “I made this one in school.” The 8-year-old boy is referring to his handcrafted ornament as he added: “But I love the Goofy one,” which happens to be Dad’s favorite.”

Kevin described this holiday season as “It’s the best ever. Getting together, dressing up, being festive, dancing to Christmas music – it’s the best. Talking about it, I’m getting super excited!”