Angelina Jolie, who has been previously rumored to be pregnant again, is “still a mess” over the death of her mother. 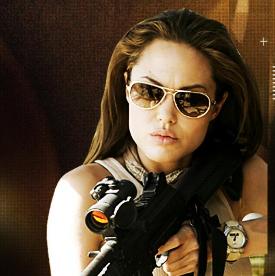 The 33-year-old actress, who has French-Canadian mom passed away in January 2007, is still struggling to come to terms with life without Marcheline Bertrand, and is worried she will never be as close to anyone else again.

A source revealed: “She has to keep it together for the sake of her kids, but she is only human and falls apart from time to time. She is still a mess over Marcheline’s departure, believing no one understands her the way her mother did. They had a very strong bond that she feels she will never have with another person.”

Angelina depends on partner Brad Pitt for support during her darkest times, and also relies on her children to raise her spirits.

The source added: “Brad has been her rock, and he will always be there for her. Without his love, she would never have been able to cope. Maddox tries to cheer her up and makes her laugh and smile. She feels like she is the most privileged woman to have such an incredible family and has said her mother is a guardian angel over her household.”

Earlier this month, Angelina broke down in tears while talking about her mom while promoting new film “Changeling”.

She revealed: “She was really sweet and was never angry – she couldn’t swear to save her life. But when it came to her kids, she was really fierce and so this is very much her, her story. She was the woman I related to, who had that elegance and strength through just knowing what was right.”