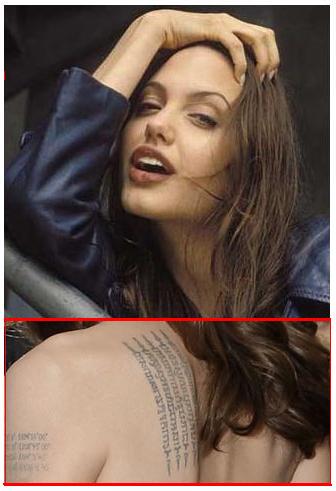 The “Wanted” actress revealed two of the temporary inkings she sports on her arms in the film, which is about assassins who are striving to make the world a better place, come from a speech the Second World War Prime Minister made during his first day of office in 1940.

She revealed, “We tried to focus the fake tattoos on themes that would be related to this sense of justice. I have Strength of Will in one language, and we added it in four other languages on my arm.”

“Know Your Rights is printed in English on the back of her neck, and again in Latin as well. From Churchill’s speech ‘We have nothing to offer but blood, toil, tears and sweat,’ I had ‘Toil’ and ‘Tears’ put on my arms.”

She added having artwork added to her body was unusual as she usually has her extensive collection of tattoos covered when starring in a film. She added, “Instead of taking mine away, which we have to do in every film, we ended up leaving mine and adding more.”