Brad Pitt was once hailed as the sexiest man alive until Angelina Jolie came to the picture one question arises: did Angelina Jolie take all of the hotness and ambition away from Brad Pitt? The actress appeared to be a workaholic while Brad Pitt has projects coming up, right now. It seems “The Good Shepherd” actress has reduced the “Babel” actor to “Mr. Mom.” 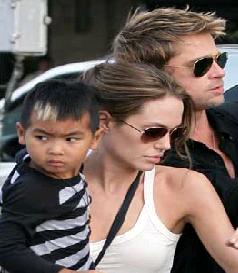 According to a magazine’s report, the source revealed, “Brad loves playing Mr. Mom. He is so protective of Angie and the kids. He loves surprising them with fun trips to museums and parks. The kids adore him; he is so creative about what they do together. He wants them to have a great knowledge of the world.”

And the report includes that Angelina Jolie is busy filming her latest movie called “Wanted” and Brad Pitt had to pick up the slack.

The source added, “Brad is very hands-on with the kids. He realizes Angie is under a lot of pressure with work, being a parent, and still dealing with the loss of her mother. He realizes she needs extra help.”