Angelina Jolie sat in a courtside booth Tuesday at the International Criminal Court and watched the trial of a Congolese warlord charged with using child soldiers. 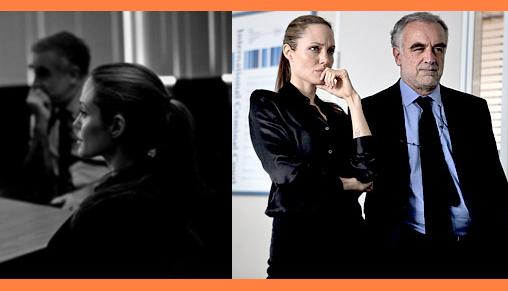 The actress watched the trial of a Congolese warlord charged with using child soldiers, the Associated Press reports.

Jolie, a mother of six, called the case against Thomas Lubanga a “landmark trial for children.

In a statement released by the court, Jolie, a mother of six, said the case against Thomas Lubanga is a “landmark trial for children” and paid tribute to the former child soldiers who travel to the court’s seat in The Hague to testify.

“After watching the proceedings from the viewing booth, I stood up and found Thomas Lubanga Dyilo looking at me,” Jolie said. “I imagined how difficult it must be for all the brave young children who have come to testify against him.”

“Using children in conflict is a heinous crime and destroys the very fabric of a society,” she said.

Jolie also met with the court’s chief prosecutor, Luis Moreno-Ocampo, during her private visit to the court.

Lubanga, founder and former leader of the Union of Congolese Patriots political movement and its armed wing, has pleaded innocent to charges of recruiting and using child soldiers in tribal conflicts in 2002-2003.

His is the first international trial to focus solely on child soldiers. It started in January and is expected to continue throughout this year.

The United Nations estimates up to 250,000 child soldiers still fight in more than a dozen countries.