Zahara, the Ethiopian baby adopted by Angelina Jolie, was conceived after her birth mother was raped, the woman has revealed. 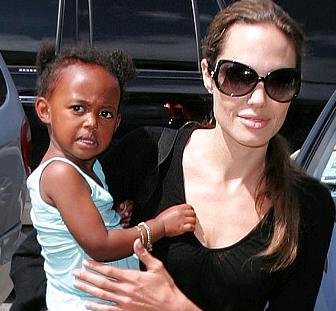 Mentwabe Dawit, mother of two-year-old Zahara, described how she was attacked one evening in 2004 after a day’s work at a construction site in the southern Ethiopian town of Awasa.

A man approached as she walked home in the darkness. Mentwabe revealed, “He pulled a dagger, put one hand on my mouth, so that I could not scream. He then raped me and disappeared.”

The 24-year-old mother decided to keep the assault a secret, saying, “I feared the consequences of being raped in a community where rape is considered a taboo, even if what happen happened forcibly.”

When she could no longer hide her pregnancy, she confided in her mother. She continued, “It was not as I feared. I found my mother understanding and consoling. She urged me not to do anything rash, which might endanger my life.”

After giving birth, she named the little girl Yemsrach which means good news in the Amharic language but soon she was unable to feed the baby.

She added, “My baby was on the verge of death. She became malnourished and was even unable to cry. I was desperate and decided to run away, rather than see my child dying.”

Her distraught mother eventually put Yemsrach up for adoption, in the belief her own daughter had died. And she revealed her mother did what she thought was best, and denied newspaper reports in the United States and Europe that she wanted Yemsrach, renamed Zahara, back.

She also revealed, “I have never disputed the adoption of my baby by Angelina Jolie. I think my daughter is a very fortunate human being to be adopted by a world famous lady. I wish them both all the success they deserve.”