Angelina Jolie, who was accompanied by her partner Brad Pitt, made her first red carpet appearance since giving birth to twins Knox and Vivienne, at Saturday’s “Changeling” premiere at the Ziegfeld Theatre in New York City. 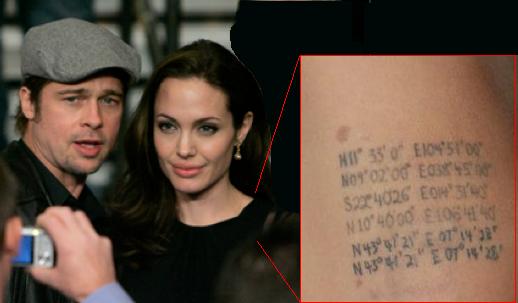 Angelina Jolie wasn’t just showing off her svelte post baby body on Saturday when she walked the red carpet at the premiere of her new film, “Changeling” – she has also flaunting her new tattoos.

The actress has made a pair of additions of tattoo on her left arm. The tattoo is a reference to the locations of each of her kids’ birth places written in longitude and latitude, in honor of her new twins, Vivienne Marcheline and Knox Leon.

Meanwhile, the actress revealed her secret behind her gorgeous figure after baby, joking: “A good dress!” She explained: “I just run around with my kids, and I’m breastfeeding. I think that does something.”

On her older kids like the idea of taking care of the twins, the proud mother said: “They’re funny. They want to help a lot now, but they’re still so little, so it’s like trying to change a diaper, you have to be careful because they squeeze them so tight.”