Tina Fey, who recently reported to have a “dead-on” close impression with her role as Sarah Palin in Saturday Night Live, appeared to be running for vice president as she would reprise her role again. 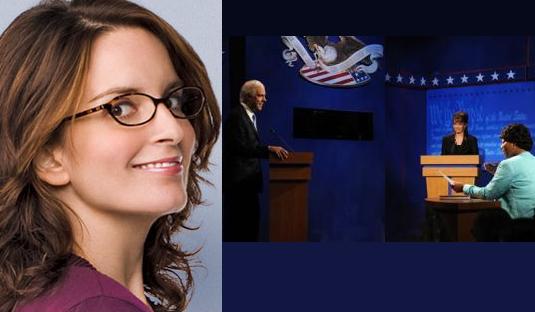 The female comedian, who recently won awards for her performance, is expected to return in “Saturday Night Live” for her role as Republican vice presidential candidate Sarah Palin after the sketch comedy show continued to pull out all the stops in its election year season. Queen Latifah dropped by to portray Thursday’s debate moderator, PBS’s Gwen Ifill, and cast member Jason Sudeikis stepped into the role of Democratic vice presidential candidate Joe Biden.

The “SNL” take on the week’s political events has become a dependable part of the news cycle this fall, offering near-immediate parodies of the presidential candidates, Democrat Barack Obama and Republican John McCain, and their running mates. The show — particularly the opening sketches — have resonated with higher ratings for the NBC program and increased traffic on its Web site where early-to-bed viewers catch the talked-about sketches in the days after.

Saturday night’s opening sketch of the VP debate appeared likely to garner similar buzz thanks to Fey’s popular Palin impression. Winking and giving answers not always directly related to Queen Latifah’s questions, Fey’s Palin said that if she was elected, her decisions would be guided by considering “what would a maverick do?”

At the end of the segment, she asked with flute in hand, “Are we not doing the talent portion?” The scene seems a reference to the role of Sarah Palin as a beauty queen since the vice presidnetial nominee is also known for her runner-up title in 1984 Miss Alaska contest.

Sudeikis, with hair slicked back and a tight-fitting suit, portrayed Biden as conflicted in his feelings for McCain, whom he called “a raging maniac and a dear, dear friend.”

Saturday’s “SNL” concluded the opening run of four straight shows — including three with guest appearances from Fey, a former cast member and head writer for “SNL” whose day job is starring in, producing and writing for NBC’s “30 Rock.” The network has said her appearances on “SNL” are being decided on a week-to-week basis.

The show has shown its willingness this fall to cast from beyond its current lineup. Last week, former cast member Chris Parnell returned to play Jim Lehrer, the moderator of the first presidential debate.

“Saturday Night Live,” which was hosted Saturday by Anne Hathaway with the Killers performing, will get its first weekend off this week. But it will still capitalize on election campaign fodder with the first of three prime-time “Weekend Update” specials beginning Thursday.