Angelina Jolie, who showed dramatic weight loss, has recently lost too much weight by her own admission. A claim from a weekly entertainment magazine revealed that she has to use a body double for the nude scenes in her upcoming thriller ‘Wanted.’ Perhaps the reason why is the bony figure of the actress. 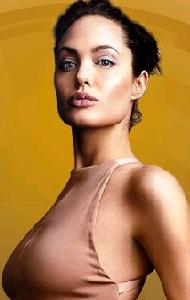 A report included that the producers of “Wanted” were forced to use a body double for a nude scene that shows Angelina Jolie shares a bathtub with her co-star James McAvoy. A friend revealed, “She’s kind of wasted away.

A friend added, “Everyone who’s worked with her for the past few months has mentioned it. They’re going to digitally erase some of her tattoos in post-production, and I wouldn’t be surprised if they also made her a bit thicker and curvier. It’s hard to buy her a as a master assassin when she’d nothing but skin and bones.”

There are published reports that the biggest impact of her dramatic loss is putting a strain on the romance of Angelina Jolie with Brad Pitt. A friend of Pitt family revealed, “The poor guy is frazzled, and he doesn’t know how much more he can take.”