Angelina Jolie, who gave up lesbian and kinky sex after falling for Brad Pitt, has left her wilder tendencies in the past since settling down with the actor. 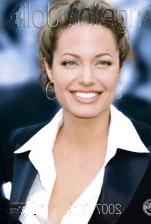 The “Good Shepherd” actress revealed, “I’ve never hidden my bisexuality, but since I’ve been with Brad, there’s no longer a place for that or S+M in my life.”

The 32-year-old star, which is a mother of four kids, insists Brad is entirely comfortable with her racy past.

The actress claims the “Ocean 13” actor trusts her 100% and is happy for her to socialize with whoever she wants, saying, “He lets me talk to whoever I want. He has complete blind faith in me.”