Angelina Jolie is definitely not all business and family, all the time – in fact, the busy mom of six doesn’t mind hitting the bar alone without Brad Pitt! 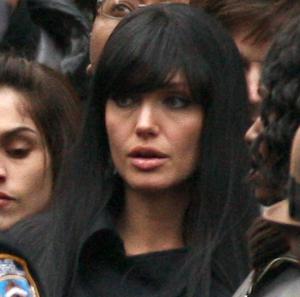 Last Friday night, March 6, Brad left NYC and Angie decided to have a solo night out of her hotel room, heading down to Sir Harry’s bar in the Waldorf Astoria and taking a seat right at the bar.

An insider revealed: “She was with a couple guys talking business and laughing. She was so skinny. There were peanuts on the table and she wasn’t eating any, and then they brought some pretzels and she ate those. She was happy they brought them over.”

One eyewitness says Angie even relaxed with a few drinks—Belvedere vodka on the rocks. She and partner Brad have been very friendly with fellow hotel guests, as they came down to the bar many nights before Angie’s solo night, joking with folks and even signing a few autographs.

This week the family has been staying in a suite with their kids, and haven’t returned to hang out at the bar yet.

Meanwhile, Angelina Jolie takes on her role a raven-haired femme fatale Evelyn A. Salt as she films her upcoming spy flick with costar Liev Schreiber in New York City on Saturday (March 14).

Salt is a CIA officer who is fingered as a Russian sleeper spy. Liev plays Salt’s boss and friend on the Russian desk at the CIA. The film was originally developed with Tom Cruise in the lead role, centering on Edwin A. Salt.