Angelina Jolie looked impossibly slender as she joined partner Brad Pitt on the red carpet for the premiere of his new film Inglourious Basterds last night. 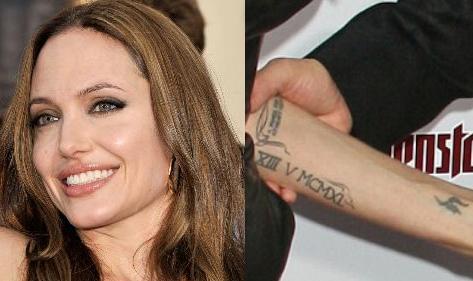 The 34-year-old actress wore an unforgiving leather bandeau dress by Michael Kors, which clung to her fragile frame as she stood alongside tanned and healthy-looking Brad.

Angelina also showed off new additions to her tattoo collection – swirls around the existing body art on her arms.

Last night was Brad and Angelina’s first public appearance since they walked the red carpet at Cannes in May.

The couple, whose relationship has been the subject of repeated rumours in recent months, made a show of togetherness as they embraced on the red carpet.

But while Angelina was greeting everyone with a large Hollywood smile, Brad looked less comfortable.

Of course, it may well have been the stress of weeks of heavy promotional duties for his new movie, which have seen him repeatedly away from his family.

While Brad was promoting the film Angelina remained at home with Maddox, eight, Pax, five, Zahara, four, Shiloh, three, and twins Knox and Vivienne, one.

But, ever the professional, Brad patiently signed autographs for the huge crowds of fans waiting for him and Angelina.

He then led the mother of his six children through the crowd by her arm, his teeth set as he negotiated the busy red carpet.