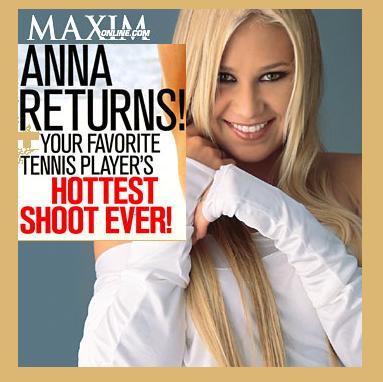 The magazine describes her as: “the ultimate tennis temptress serves up the sexy and declares that she’s single again. but don’t get too excited—it’s not like you have a chance in hell!”

According to the magazine, before simply being superhot, Anna was a superhot tennis player. In fact, Anna ranked as high as No. 8 in singles and No. 1 in doubles. Now she watches “Heroes” while listening to Elton John and drinking diet soda… We can only assume. For more stunning shots of the Russian hottie, check the Maxim official website.

Here are some details of Anna Kournikova favorites: