Kate Middleton, who was called mousy girlfriend by Paris Hilton, has sparked rumor that she was expecting Prince William’s baby. 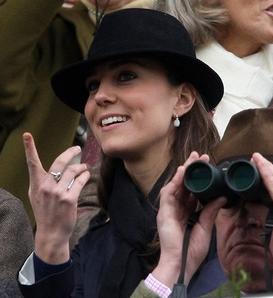 The 26-year-old brunette was said to have been horrified when she suspected that she might be pregnant.

A Palace source revealed: “The panic started a few weeks ago, when Kate told Wills that she thought she was pregnant. [Prince] William was left speechless. They’re always very responsible and this shouldn’t have happened.”

The source reports that Kate Middleton, particularly, was in shock. She and Wills have been together for many years and she has always been very sensible about these sorts of things, understanding the magnitude of what a situation like that would mean.

When asked about the brewing scandal, which had royal insiders in an uproar, veteran royal commentator Judy Wade described the situation as completely out of character for Kate.

For more information or full story of the suspected pregnancy of Kate Middleton, see this week’s Woman’s Day (on sale November 10).

According to a report, the accompanying article then rattles on about the pair worrying Middleton could be pregnant but then after “weeks of worrying about their future, William and Kate learnt that the pregnancy concerns were ill-founded and it was just a scare”. The photographs illustrating this non-news show Middleton resting her arms across her abdomen. And yes, she is also wearing a cardigan.