Ashley Tisdale has hit the cover of Girlfriend magazine for January 2008 issue. 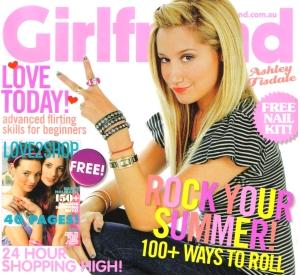 The “High School Musical” star, who recently admitted having a rhinoplasty for health reason, revealed that Zac Efron took her to gym recently in the interview for Girlfriend magazine. You could see her cover here. Other shots here as well as here.

In the interview, when asked: we heard that Zac Efron took you to the gym recently, she answered with a laugh, “Yeah.”

If Zac Efron is a fitness freak, she replied, “Oh yeah, he is. He’s really into protein shakes and he’s a really good trainer. He was like, me, and Vanessa’s trainer during the High School Musical movie. I didn’t really know that much about that stuff. Like, I went to P.E. when I was younger, but I didn’t know much about weights and the gym and so he helped train us the whole time and, you know, besides the pain, it was actually really fun. But we would always eat carbs without him knowing just ‘coz he would get on our case about it!”