Bernie Mac, who is the comedian, endured some heckling and a campaign rebuke during a surprise appearance Friday night at a fundraiser for Democratic presidential candidate Barack Obama. 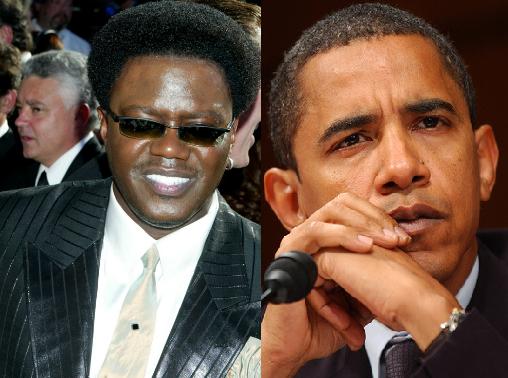 Toward the end of a 10-minute standup routine at the Hyatt Regency Hotel in downtown Chicago, the 50-year-old star of “The Bernie Mac Show” joked about menopause, sexual infidelity and promiscuity, and used occasional crude language.

Mac revealed, “My little nephew came to me and he said, ‘Uncle, what’s the difference between a hypothetical question and a realistic question?’ I said, I don’t know, but I said, ‘Go upstairs and ask your mother if she’d make love to the mailman for $50,000.'”

As the joke continued, the punchline evoked an angry response from at least one person in the audience, who said it was offensive to women.

A man shouted from the crowd, which paid $2,300 each to support the Illinois senator, revealed, “It’s not funny. Let’s get Barack on.”

About 15 minutes later, Obama tried to smooth things over with a joke of his own.

The incident drew response from Obama’s campaign, which criticized Mac for his choice of material.

Jen Psaki said in a statement after the event, “Sen. Obama told Bernie Mac that he doesn’t condone these statements and believes what was said was inappropriate.”

Bernie Mac, who was a Chicago native, said he’s a longtime Obama supporter and called the presumptive Democratic nominee a “man’s man” while offering him advice for the duration of the campaign trail.

He continued, “People like rumors. They’re going to say things like you was at the club with Lil’ Kim, and you and Kanye West got into a fist fight,” he said. “You can’t get upset. You’ve got to keep hope alive.”

Mac’s appearance was Sen. Obama’s first celebrity event of the evening. Later at a Lincoln Park nightclub, Sen. Obama spoke to a raucous crowd of music fans, who paid up to $500 per person to see a performance by Wilco lead singer Jeff Tweedy, and two other band members.

Sen. Obama added, “Before these guys go, I want them to know that I had heard a rumor that they had suggested that I had nothing by them on my iPod. That is not true. I love Wilco.”