Bianca Gascoigne showed off her sexy curves as she geared up for Valentine’s Day while wearing sizzling lingerie. 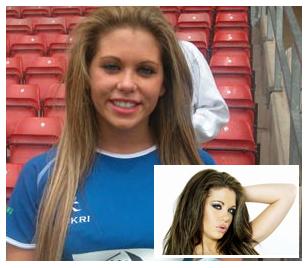 The British glamour model and television personality posed for a sexy snaps and already showed what she’ll be wearing on Valentine’s Day night, which you could see here and here.

Gazza’s stepdaughter said in a recent magazine interview that the only part of her body that she likes — her breasts.

“Love Island” star, who previously admitted that she had had a breast enlargement, first came to public attention when she talked about her experiences growing up in a house where her stepfather Gascoigne was allegedly abusing her mother.

Most recently, Bianca has won ITV’s reality TV show, “Love Island”, which is set in Fiji. She admitted on the show that she had had a breast enlargement from an A cup to a 34C in February 2006.

In September 2006, Gascoigne appeared on the front cover of Loaded magazine and in January 2007, the cover of Nuts magazine. She has also been featured in Maxim, FHM, Zoo Weekly and numerous tabloid newspapers.