Bikini girl Katrina Darrell thinks Kara DioGuardi made a fool of herself during their surprise duet on Wednesday’s American Idol finale. 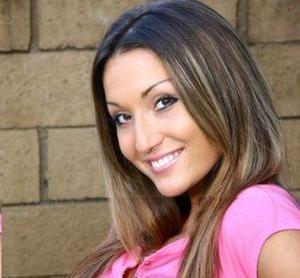 “I don’t think she got the reaction she was hoping for. I think she probably thought I would cry or get mad, and I didn’t — I played it off,” Darrell smirkingly revealed.

“Looking back at the tape, she just made herself look stupid. She didn’t make me look stupid,” she continued.

DioGuardi and Darrell have been feuding since the judge slammed her performance of Mariah Carey’s “Vision of Love” during her audition. At Wednesday’s finale, Darrell performed the song (again, in a bikini — but now with breast implants) and was surprised by DioGuardi joining her for a duet midway through.

The judge even showed off her own two-piece after Ryan Seacrest dared her and promised to make a donation to her favorite charity.

Darrell says producers cut her microphone off as DioGuardi joined her on stage — but she struggled to keep her composure.

“I knew there were 100 million viewers, so I couldn’t cry,” she says. “I couldn’t get mad. I just had to smile and deal with it.

“I think they [show producers] tested me. I think I did really well considering all that I went through,” Darrell went on.

Darrell’s sister wasn’t so nice backstage after their performance.

“We were walking and [Kara] said, ‘Oh sweetie, I hope you didn’t take anything personally.’ I rolled my eyes, and my sister said, ‘Hey, next time you try to upstage my sister, get a spray tan! How old are you? 45 or 50?'” Darrell says. “I looked back and shrugged. She kind of said what I was thinking!”

For the record, who does Darrell think looks better in a bikini?