Brad Pitt and Angelina Jolie, the stars of the movie “Mr. And Mrs. Smith”, have banned their children from watching their violent movies. 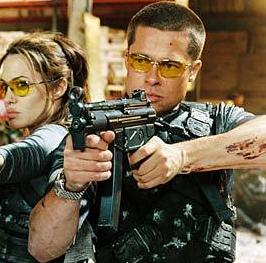 The celebrity couple has also banned their brood from playing with toy guns because they don’t want them exposed to violence.

A source revealed, “Angelina Jolie is protecting them from seeing her make violence look good. Most of her successful roles have had her waving weapons and getting violent.”

The celebrity couple is currently in Prague, where Angelina Jolie is doing the movie “Wanted.”