Angelina Jolie and Brad Pitt were caught getting amorous in the actor’s trailer on set recently. 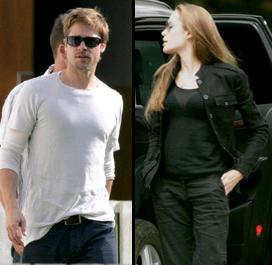 The celebrity couple has previously admitted they have to “schedule alone time together” and it seems one of those rare moments was interrupted.

A source from the set revealed, “It was the middle of the day, and they were both hanging in Brad’s trailer during downtime. Someone was sent to fetch the talent from the trailer and walked in on a little sexy something-something, going down, so to speak. Let’s just say they’re clearly still hot for each other.”

“The Good Shepherd” actress recently revealed, “We’re working on it. Right now, we’re not great about mommy and daddy time. We don’t go to parties. We hardly ever leave the house. We try to schedule time when we’re alone.”