Brad Pitt and Angelina Jolie have tried to eradicate rumors their romance is on the rocks by partying together at a Chicago nightclub. 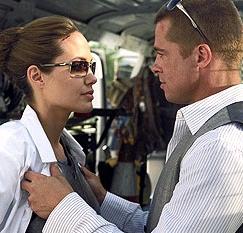 In recent weeks rumors have sparked that the celebrity couple is close to splitting, three years after they first met on Mr. and Mrs. Smith film set.

Angelina Jolie has even been reportedly seen viewing a California villa all by herself. However the celebrity couple held hands early on Monday as they left a nighttime hot spot in the Windy City, where the actress is filming “Wanted”.