Elisha Cuthbert, who recently admitted that she is a control freak, was spotted wearing a blue bikini in Malibu. 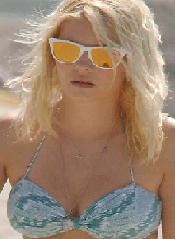 The actress attended the beach party of the socialite Paris Hilton. She brought her camera and appears to be the photographer for the event.

The “24” star also previously revealed she tries her best to stay out of the public eye as she likes her private life to remain private, saying “Being famous does alter your privacy.”