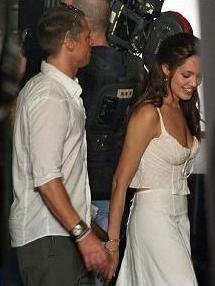 The celebrity couple picked up the artist’s work at a contemporary art auction in London at The Shadow Lounge organized by photographer-turned-gallerist Steve Lazarides.

The gallerist added, “There is a whole new set of buyers. Whether they’re rag trade, City boys or celebrities, they tend to be under 45. They’ve got money and they don’t particularly want to spend it on a Picasso – they want to buy something that relates to their lives, their time and their culture.”