Eva Mendes loves gardening n@kedly. The actress is so comfortable in her own skin she even weeds her flowerbeds and prunes her bushes completely n@ked. 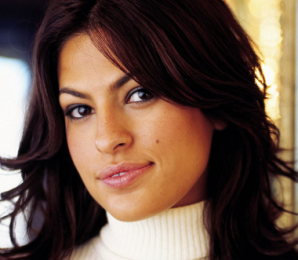 Eva revealed, “I love being n@ked. I do everything in the n@ked, even the gardening! We’re Cuban, and it’s a hot island. Why not go n@ked?”

The “Hitch” actress was not so comfortable stripping off in front of the cameras for her new film “We Own the Night”, which opens with Eva’s raunchiest ever s*x scene.

The 33-year-old Hollywood sex symbol was so nervous, she had to get drunk to shoot the scene, saying, “It’s not a natural thing on camera, so it’s always going to be a little awkward. It was tough. That morning I was so nervous that the director was like, ‘Why don’t you put a little vodka in your orange juice?’ So I did. It took the edge off.”

She added, “It’s weird to see myself in bed with Joaquin up on the big screen. I told my mom she has to come 15 minutes late. She wouldn’t live through that first scene – she’d have a heart attack. The poor lady would keel over in the movie theater.”