Brad Pitt smiles for the photographers while attending the Academy Awards Nominations Luncheon on February 6. 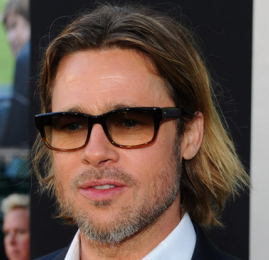 The 48-year-old actor, who is wearing Louis Vuitton for the event, is nominated for his films “Moneyball” and “The Tree of Life” receives Best Picture nomination. Meanwhile, Brad dishes about his family and calls Angelina Jolie as a bad girl on CBS This Morning’s interview.