Brad Pitt is worried again about his baby mama Angelina Jolie and again there are reports coming in about the health of the actress. 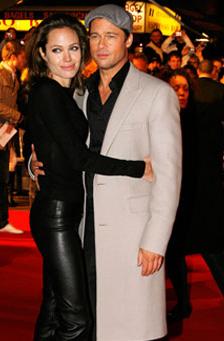 The one time pin thin Hollywood star spent the last year in what was described in reports as a fragile emotional state while mourning the death of her beloved mother and she blamed that for her slight frame.

Now she has a bit of the body back that made her famous but many believe that is because she is again pregnant. Pitt and the rest of her family worried about her with the birth of baby Shiloh, and now there are fresh worries as Angelina Jolie tried to create a buzz with a weird Iraq trip that was criticized by all sorts of people.
According to a report, Angie’s friends were stunned by her decision to go. “All her friends think she’s totally crazy for going to Iraq while she’s pregnant with twins,” says a pal. “I mean, it’s insane.” And if an attack occurred, Angie would have faced another risk: “Stress could cause premature contractions,” notes Dr. Jacques Moritz, an ob-gyn who does not treat the actress.

As if that weren’t enough, a parasitic disease called leishmaniasis, also known as the “Baghdad boil,” has infected thousands of U.S. troops. Spread by the bite of a sand fly, it can, it its worse form, cause organ failure and death.

Is Brad Pitt right to be concerned? Check this, according to the weekly magazine and adding to the risk factor, Angelina apparently left the United Nations in the dark about her visit. “[Her trip] was planned independent of us,” confirms a spokesman for the U.N. high commissioner for Refugees.

So what was Angelina trying to prove? It should be noted that no one on the Pitt-Jolie team has confirmed that she is with child.