In the new issue of Rolling Stone, Brad Pitt comes to Angelina Jolie’s defense over a recent New York Times article that suggested that she is a master at controlling the press. 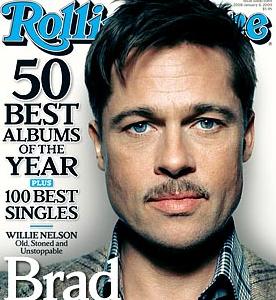 The “Babel” actor revealed: “It sounded to me like the story made Angie out to be manipulative in some way. She is savvy.”

The actor continued: “I get defensive. [They’re] talking about not only the woman I love, but one of the people on this planet who I have the greatest respect for. I think she’s as honorable as anyone I’ve ever met.”

It was Angelina Jolie got him into flying as the actor explained: “She’s definitely more experienced. Yeah, she’s bada*s.”

On his favorite performance by his partner and mother of his six children, he answered: “Mr. & Mrs. Smith. Because you know … six kids. Because I fell in love.”

On Maddox who is shaping up to be a tiny terror, he said: “Our seven-year-old was searching the word ‘weapons’ on Google the other day and ended up on some white-supremacist site. I’m sure now we’re on all kinds of watch lists.”

Here are some highlights of his interview:

Did you go to church every Sunday? He answered: “Yeah. And it was too much of what you shouldn’t be doing instead of what you could be doing.”

Where were you on election night? He replied: “Chicago. I went down to Grant Park, because I was doing Oprah the next day. I walked home from the park to the hotel, which was a half-hour walk. And I could walk freely — no one was interested in me at that point. People were weeping and hugging. The sense of elation in the streets — it was great.”

Do you think Fight Club could have been made after September 11th? He said: “No. Certainly not that ending. We debated it then. There’s a line we stuck in, about the buildings being evacuated.”

Benjamin Button and Fight Club actually deal with similar themes: having a finite amount of time in life, and what we should do with it. But they come to such radically different conclusions. He laughingly answered: “That was a Nineties conclusion. Now we have an Aughts conclusion. I actually never thought of what you just said. But it’s probably true.”

It’s just, Benjamin Button feels very positive, but you could easily come away from that story feeling very bleak. He added: “Yeah, I think it’s open to . . . it’s your choice. I find Benjamin is about those universal things we all share — that 95 percent that makes us all the same, wherever we are in the world. Our loves, our hopes, but also the loss that we all walk around with and hide very well, and the ultimate notion that we’re all expendable. To me, it’s a counterstatement to this divisive period we’ve been in, where we focused on the two, three, four, five percent of ways in which we’re different.”