Jennifer Aniston, who previously revealed that John Mayer is rare, graced the cover of GQ magazine for its January 2009 issue as she posed in nothing but a necktie. 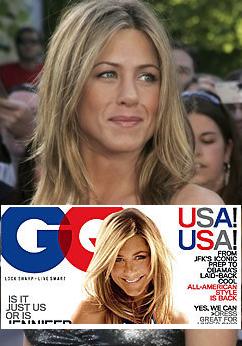 Weeks after complaining about her Vogue cover, which hyped her Angelina Jolie “uncool” comments, in a cover interview, the actress made a candid interview and talking about Angelina Jolie and Brad Pitt again.

Here are the highlights of her new candid interview:

On why she thinks people are still interested in her split with Brad, Jennifer Aniston jokingly replied: “The funny thing is that people don’t realize we all go away to the Hamptons on the weekends… No. But can you imagine? That’d be hysterical: I’ve got Zahara on my hip, and Knox…”

Joking aside, the actress revealed that she and Brad Pitt do speak from time to time, saying: “When there’s something to congratulate or celebrate, there’s always an exchange.”

On Angelina Jolie’s revelation that she and Pitt fell in love during the making of Mr. & Mrs. Smith, the actress replied: “Considering the source, nothing surprises me.”

On her on-again boyfriend John Mayer:, she shared: “Honestly, did not know much about him before I met him. I’d heard … you know, uh ‘Your Body’ – that song. But what I can say is that I had no idea what an extraordinary musician he is. And it’s just great to sit and be witness t that. It’s kind of like, Whoa!”

On [her reactions to the] the rumors surrounding Jen and John, she declared: “I am not having his baby. And I have not popped the question.”

On her next film called Pumas, which she calls “sort of a female Wedding Crashers” about two “aspiring cougars,” she continued: “It is so a comment on the sexual double standard, and what’s been ironic is how hard it’s been to get this movie made… Studios want it, but they are afraid of Middle America. They’d want to change it; they’re saying, ‘Oh, you can’t do that, people just can’t imagine you…”

When asked what she sees as a disturbing problem in Hollywood, she added: “Look, I think all women on some level just want to rage against the machine… There are too many movies out there that don’t empower women, movies in which their only way of being happy is finding a man. And you know, that’s not my favorite theme.”

The January issue, which features sizzling picture of Jennifer Aniston, will hit the newsstands on December 23.