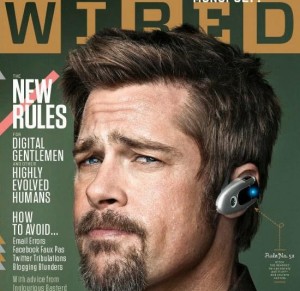 In August’s Wired, the Inglourious Basterds star, 45, is asked what he thought about Ashton Kutcher Tweeting a picture of his wife Demi Moore’s behind.

“Don’t take a picture of your wife’s butt. That’s silly,” he tells the magazine. “Take pictures of other people’s wives’ butts.”

As for online dating, Pitt warns those looking for love on the Internet.

“Everyone lies online,” he says. “In fact, readers expect you to lie. If you don’t, they’ll think you make less than you actually do. So the only way to tell the truth is to lie.”

Wired also asked if it’s acceptable to talk on the phone while using the bathroom.

“No, you can’t talk on the phone!” Pitt declares. “Do you want the guy next to you to hear your entire conversation?”

Pitt says texting on the potty is acceptable, however.

“Just be sure you don’t hit the wrong button and end up putting a photo of your junk on Twitter,” he says. “Trust me, you don’t want those followers.”

As for his pictures, Brad Pitt scans in a monthly pornographic glossy, the April 2008 issue of Hustler Magazine, in this new photo from the August 2009 issue of Wired magazine.

In another photo, Brad sitting in a movie theater next to Inglourious Basterds director Quentin Tarantino, who’s wearing a shirt promoting Kill Bill, another film he directed.