Brad Pitt has introduced his former wife Jennifer Aniston to his baby daughter Shiloh during a secret meeting, according to reports. 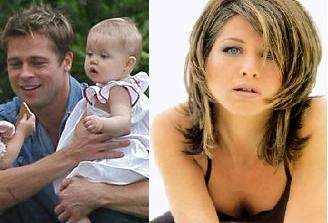 The pair arranged the lunch date last month, while the actor was promoting Ocean’s Thirteen in Los Angeles.

It’s unknown if Angelina Jolie was aware of the meeting, but insiders suggest the date didn’t take place in private since the actor took the nanny and maid as well.

A source revealed, “They met for just over an hour. It was very emotional. Jen held the baby and called her ‘adorable’.”

The pair has reportedly stayed in contact since, with a series of email conversations.

The source added, “They are trying to be adult about the whole thing. Now that they have properly moved on, they can move towards building a friendship.”