Brad Pitt admits in his latest interview with Times Online that he’s hungover, and that he had a “late night… now, I need coffee.” 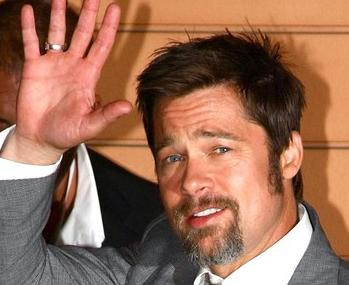 The actor was dressed in dark slacks and a blue shirt, and despite the sore head, he looks as ludicrously handsome as ever.

On the split rumors: “Yeah, we’re really miserable,” Pitt deadpans but conveniently doesn’t answer the question directly. Later, he insists the red carpet appearance wasn’t simply a PR exercise. “No, no. It’s fun up there and I love it. We’re not even really aware of what is going on.” He’s clearly weary of discussing the one area that lurks, like the proverbial elephant in the room, around any journalistic encounter with him. “We just don’t really participate,” he says of the phenomenon that surrounds them. “It kind of goes on without us. It’s self-generating. When I was younger I would take it personally; it was such an injustice to me. As a man or as a woman I don’t know how they could sit there and do it. I mean, [the stories] are consciously fabricated and I don’t know how you could do that.”

On moving around so much: Pitt insists that they love it. “Everywhere is interesting in its own way, each place has its own feel and something to offer: you pick up something, the kids are picking up something. They have this world view which we are very proud and happy that we are able to provide.”

On how the kids deal with their parents’ fame: “We’re still trying to negotiate how we explain to them what we do. It’s not strange to them that their parents will come on television. And it’s not strange for them to walk outside and for there to be a photographer. They just think if there is printed material [as he disdainfully refers to the gossip mags] hanging around, their parents might be on the cover.” Surely they must be tempted to take a peek? “No, there’s no point.”

On family time: “Oh, we get peace in our lives. We got out here a couple of days early with the family and we get to hang out in a place in Provence. We’re pretty good at it. You carve out that time for the family. Do we get a little silence with the kids? No, not that kind of silence – silence is over at home, but we like that chaos…”

On German beer (again): “Berlin is not a stranger to us. I like the beer, as you can see from this morning. The beer is good.”

On working with Quentin Tarantino: “When you get into a Tarantino film he has all the back story lined up for you. It’s all teed off and it’s really well thought out. Other films? Let me think. That requires memory and I’m struggling with that right now… Listen, I like a bit of extreme and I’m always looking for other areas and pushing in different directions, but it’s kind of incumbent on what comes your way to pick from.”

On Make It Right NOLA, Brad’s affordable housing project in for the lower 9th Ward in New Orleans: “It’s going really well… By the end of the year we will have 100 homes and it will be the greenest, most intelligently designed neighbourhood in the United States. We have families coming in and their electric bills are $8, $12. It’s a big deal for anyone, but for a low-income family, it’s life-changing. It’s also a big deal because it’s proving [green] technology at all strata. It’s amazing and I thank everyone who’s been involved.”

On his future as an actor: “I think [acting] is a younger man’s game; there are fewer interesting parts for older people and we all get older. But I feel like I’ve done it. I’ve kind of had my time and that’s quite freeing.”

Any acting dreams left? “Yes, of course there are,” he smiles. “But I’ll do them first and then we’ll talk about them.”