In his film, The Curious Case of Benjamin Button, Brad Pitt plays a man–born 80 years old, who ages backwards into infancy. The Hollywood actor talked about getting older but definitely wiser. 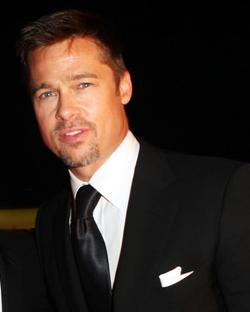 The actor revealed: “Once you hit 40, you start re-examining the math of it all. I’ll trade wisdom for youth any day.”

Making the film also forced Brad Pitt to examine the importance and fleetingness of love–something he seems full of these days as he explained: “It’s a tragedy in the sense that any love involves loss, and that’s the risk you take. And the greater the love, the greater the loss. I certainly feel that now with the woman I’m with, and the children that I have. But whatever the course may be, this time together is extraordinary.”

While it could seem that he jumped head-first into fatherhood, Pitt says he wouldn’t trade it for the world, calling his current state of affairs, “the direction I always thought I would go in. But not until, with Angie, and it felt like a natural evolution, a natural direction.”

He continued: “I had a whole other life and I got to experience a lot. And I probably got away with more than I should. And it kind of ran its course, you know, it kind of hit a dead end.”

Brad Pitt thinks he has matured professionally, saying: “I don’t have to grope as much for the character. I can get there quicker, so it’s not as much trial and error. Also, as I get older, more experiences, I’m more fine-tuned in what I’m after, what I think speaks in the piece. And lastly I want to hurry and get home to my kids.”

Nowadays, Brad Pitt spends more time with people who are older, rather than younger, and hopes people will take away a new respect for old age after seeing his film.

He added: “You meet someone who is maybe in their 60s, 70s, even 80s, and you meet them as that person, anyone beyond the age of retirement, so to speak. And you seldom realize they had a whole life of experience. They were just as virile and ingenious and capable as you believe yourself to be.”