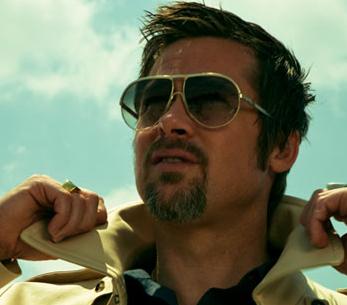 “I have a love in my life, a soulmate — absolutely,” he says.

Here are the details of his interview:

Family life with Angelina.
“Having a family is a choice. It’s certainly more than the ball-and-chain that country songs sing about. Our family is the base that gives Angie and me the long tether to go out and do all these other things. It’s a big step we’ve taken. We’ve put down roots together. As Angie and I carve out our time as a couple, we carve out our lives as individuals.”

Working with Tarantino on Inglorious Basterds.
“I did the movie because I’m a Tarantino fan. It’s an outrageous movie and it’s hilarious. From my perspective, making it was like a reward for decades of hard work. I’ve never had a nicer experience making a movie. It’s a revenge fantasy. It kind of stomps and tap dances all over the [WWII stigma]. I expect I will get some flack for it. But it’s Quentin Tarantino, man.”

Finding vengeance.
“You know who enjoyed making the movie the most? The German actors! I realize that they, being a younger generation, have to carry the stigma from World War II. And, in this film, they got to stomp all over that thing. Everyone’s born of a particular nationality and it seems you have to carry the sins of the fathers even if you had nothing to do with their crimes. And you really feel the frustration with that and the need to shake that off.”

Dealing with the spotlight.
“When you’re out in public, you’re always on, and you’ve got to keep moving like a shark. Otherwise, if you stop, you draw a crowd and you have to sign autographs and do photos. I needed to get done with all that. So I moved as far away from that as I could. I don’t know anything else anymore. And I’ve got a good workability with it. There’s perks with it, pluses that I’ve used to my advantage. There are also losses of privacy, but I’ve learned to construct ways to find that privacy. I don’t know any other way of being.”

His life in France
“There’s real value in the quality of life in France. They’ve got a great healthcare system, great education. The Lycee Francaise is a bilingual international school that works for us because we can plug the kids into the school program even if we are off doing a movie somewhere, like London or New York. Most places have a Lycee program.”

The right to love.
“It’s ridiculous that Prop 8 took away gay people’s right to marry! I have no understanding of that kind of hatred. Maybe it’s fear of difference or of the unknown. If you feel belittled, maybe you need someone else to belittle to feel powerful. It’s the only way I know how to explain it. You’ve got religion telling you what to think about homosexuality, about marriage. They say homosexuality is a choice, a lifestyle, something you can be cured of, and that isn’t true. But if you’re tucked away and have no friends who are gay, you’ll believe what the preachers say. Just think of it in terms of being in love–how would you feel if someone told you that you couldn’t be with the person you loved?”

On bigotry.
“Why would anyone hate another race? Or hate Jews? Or gays? Maybe hatred is something that is passed on–like a kid who was beaten by his father and then grows up to beat his kid. It is the only way I would know how to explain it.”

On his spirituality.
“I grew up in a Christian community and for me the positive thing was that once a week, on Sundays, we focused on bigger issues. But the negative to me is that it was very stifling in the end because it was about what you can’t do. Now, Christians will argue, ‘That’s not true.’ To me, I just found Christianity to be, ‘Don’t do this, don’t do that.'”

His true love — of architecture.
“Architecture is like play to me. As a boy, you play with Tinker Toys, Lincoln Logs, Legos, and you get interested in how things are made, like cars and drills and all that. Years later you come back around to what interested you as a boy. Now if I have something that I’m dealing with that’s causing me a lot of stress, my mind goes to architecture. I walk around the yard and start thinking about what I need to do to the house structurally. It’s similar to puzzles in that way, like a crossword puzzle or anything else I can put my mind into. It’s a relief for me.”

Responding to Hurricane Katrina’s aftermath in New Orleans.
“I fell in love with the place after spending a lot of time on a film there (Interview With The Vampire, 1994) I found it to be an authentic city, and it’s still that. When Hurricane Katrina happened in 2005, I experienced the same outrage as everyone else who was watching the news at that time. I went down to see it for myself. I walked around the area and I thought, naively, ‘This isn’t too difficult to repair. We’ve just got to rebuild.’ I really had no idea of what I was talking about. To me, the whole thing was a justice issue. There’s a responsibility to correct that wrong. I think it’s the government’s responsibility. But I saw a way to help, and sometimes that’s what it takes, isn’t it?”

Looking towards the future.
“I’m really enjoying my life right now. I don’t know what the future is. I certainly don’t have any political aspirations. Hopefully, I can get done what needs to be done by working with people who do have those aspirations. Movies are a team sport, and you’re subject to the director’s vision, and the editors, and some of the other things that are going on. I look forward to finding this singular thing that’s just for me to discover and then, if it works out in the world, it works, and if it doesn’t, it doesn’t. I’m not talking about film at all. I’m talking about something beyond film.”