Since Jon & Kate Plus 8 stars Jon and Kate Gosselin announced they were divorcing on June 22, their lives have been turned upside down. 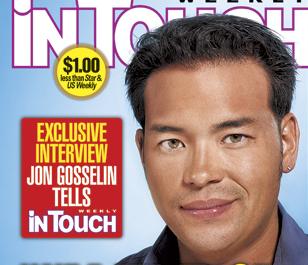 Jon’s life has become a circus and he’s been criticized for partying in St. Tropez and in N.Y.’s Hamptons, and for dating two younger women, Hailey Glassman and tabloid reporter Kate Major.

“Things have gotten out of control,” Jon tells In Touch in a revealing interview. “Many people think that everything moved too fast, that I was out partying too quickly. But Kate gave up on the marriage last October, and the divorce will be finalized by September 30.” Jon, 32, met with In Touch on August 2 in New York to set the record straight about his marriage, his new girlfriend, how all of the drama is affecting his children and why he’s tired of being blamed.

What is the biggest difference in your life now, compared to a year ago?
Let’s go back to October of last year — that’s when all of this happened. Kate basically came to me out of the blue and said, “I am done. You are going to live your life, and I am going to live my life.” I was like, “What?” I didn’t really know what was going on. When she said that, I was really upset and nervous.

Why did she want to break up?

I think she initiated the split because she wanted a career. Maybe I wasn’t sure what I wanted to do, and she was going to move on regardless. I said, “Are you sure about this?”

Did you want to work it out?
Yes, I asked, “What do I have to do to mend the relationship? What did I do wrong?” I was beating myself up about it. So I read a lot of books about personalities, like The Five Love Languages. Throughout the marriage, I felt like my personality had changed a lot. In December, I went to therapy. I asked Kate to come, but she didn’t want to. She said, “If you have a problem, go fix it.”

When did you and Kate start living separate lives?

We went to Utah on January 1. On January 12, she flew back with security and I stayed. That’s when I started to just hang out and meet people, and feel free. Not too many girls, just with my guy friends. I couldn’t do that for nine years. When I came back on the 17th, Kate and I weren’t talking. So I just said, “I’m moving out of the house,” and that was it.

What was your first relationship?
Hailey — it started around May. She is the polar opposite of Kate. It’s really different. I feel good about myself and people see my good qualities. I’m not being put down. If I want to go out with my friends, Hailey says, “Oh, go out.” I’m not used to that. I was used to, “No, no, it’s your fault.” Sometimes I ask Hailey permission, like I used to do with Kate, and she says, “You don’t have to ask permission.” I was used to living like that, and now it’s like a breath of fresh air. You can have a balanced relationship but also spend time with your friends.

How did you fall in love with Hailey?
We started talking and got along well. I started getting really attracted to her, like, on the phone. She really listened to me and took in what I was saying. Then she came back to her parents’ house in May and I went up to see her. We hit it off. It was great. She is amazing.

Kate Major said she was dating you.
I felt like, “Okay, I have a cool new person in New York and we can just go out for dinner.” Then it was a conflict of interest with her work. I have always been true to Hailey.

How are the kids handling the split and all of the drama?
Even though they are young, it still hurts them. They can’t figure it out. They’re like, “Why aren’t they together? Why can’t you hug her?” The other day, Alexis said, “I want you and Mommy to be home together.” And it hurts because it’s not going to happen — and how do you explain that? I just let them know we love them no matter what. It’s hard. I feel like I failed them.

When will you introduce Hailey as your girlfriend to the kids?
I think it would have to be after the divorce is finalized. I can’t just show up with Hailey. I think we all need a little routine in our lives. Right now, it’s helter-skelter. Once there is a routine, we’ll start off slowly, like going out to dinner. We are dealing with eight different personalities, and they will each handle it in different ways. They may never be comfortable.

For the full exclusive interview with Jon Gosselin, check out this week’s issue of In Touch Weekly, on newsstands now.

Meanwhile, Jon tells In Touch that the 23-year-old babysitter did indeed stay the night, but explains that it was a purely innocent visit. “There’s no truth to this, there’s nothing going on between my nanny and me,” says Jon. “She came over to my house after her shift at a restaurant at 3 a.m. because I had to leave the house very early the next morning” for his exclusive interview with In Touch, he adds.