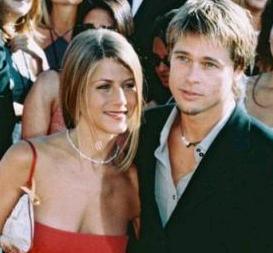 The actor revealed Jennifer Aniston will always be part of his life, saying, “Jen and I still maintain a deep friendship and have a lot of life together that isn’t erased in any way.”

The 43-year-old actor also revealed that he handled their subsequent divorce as best he could, adding, “I don’t know how better to have handled it. My view was, this is no one’s business in the end – at least in matters of the heart. So you need to protect all involved as much as possible. I don’t know if that cooled things off or exacerbated them, but it was a thing I felt justly about at the time. Again, the thing guiding me then was you don’t know how many days you have and you need life to be everything you want it to be.”

The “Babel” star also revealed the “magical” time he had when Angelina was pregnant with Shiloh, their only biological child. He continued, “I remember making it vividly. For one, Angie was pregnant. It was a very nice time for us. So personally, it was a magical time.”