Angelina Jolie recently admitted in an interview that for Brad Pitt to hold on to her he would have to deal with her mood swings. 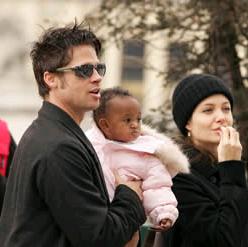 The couple is in New York now and they appear to be a happy family as they do the photo op rounds visiting art stores and hot dog stands.

A source revealed, “They’re fighting a lot. Angelina’s moods are up and down and often volatile. She’s lashed out at Brad telling him, “The only reason I’m with you is you’re a mother to the children!” Brad has a much more nurturing, maternal side to him than Angelina.”
There are reports claim that during the couple’s recent stay in Chicago where Angelina was working on her new movie, Brad didn’t visit her at work. The insiders in the set revealed, “While she seemed happy to be working, there was a certain sadness about her, maybe having to do with her personal life.”

Another crewmember added, “I don’t think they’re doing so well. Brad hasn’t been here, and Angie told me herself that they’re fighting.”