Brad Pitt, who was previously rumored that his parents were upset with Angleina’s breastfeeding photos, talked about his love of his partner Angelina Jolie in an upcoming interview on The Oprah Winfrey Show. 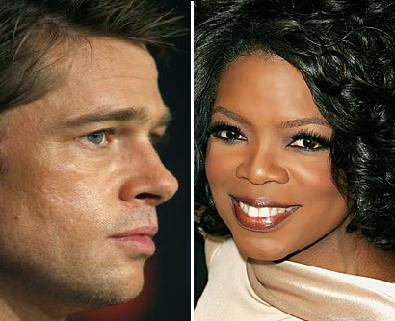 During the conversation, Oprah Winfrey tells Pitt that Angelina Jolie is the love of his life. Then, she asked him if he’s the happiest he’s even been.

It is Pitt’s first sit-down with Winfrey since his 2005 split with Jennifer Aniston (a Winfrey pal).

He called his kids the “funniest people,” but admitted that he can only handle being alone with four of them at a time.

He tells Winfrey that 2-year-old Shiloh, who is a Peter Pan fanatic, will only respond to the names John and Peter. Four-year-old Pax, he says, rebelled against a timeout session by peeing on the timeout chair.

The actor told Oprah Winfrey that he wanted to portray Jolie as a “femme fatale.” He goes on to say she is “very sweet.”

Brad Pitt and Winfrey bonded this past week at Chicago’s Grant Park after Barack Obama was elected president.

Oprah Winfrey revealed: “I would have invited you out with me to the rally last night. But I was down with the people, and I didn’t think you would want to be.”

Brad Pitt replied: “I took the tram, shoulder to shoulder.”