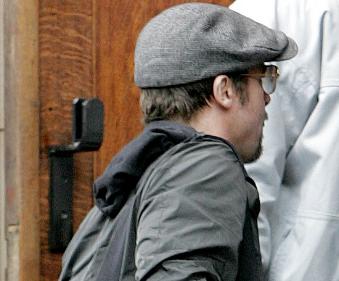 The dad-of-six was was dressed down in jeans, a jacket and his favorite newsboy cap.

The same day, he took a flying lesson — a longtime hobby of Jolie, who got her pilot license in 2004.

Jolie was also spotted on set holding Richard N. Haass’ War of Necessity, War of Choice: A Memoir of Two Iraq Wars, which documents the president of the Council on Foreign Relations’ personal account of the decision to invade Iraq.

The Jolie-Pitt family has been living on New York’s Long Island while Jolie films the flick, which hits theaters next summer. She stars as Evelyn A. Salt, a rogue CIA operative trying to clear her name.