President Barack Obama has welcomed actor Brad Pitt into the White House for a secret meeting to discuss the aftermath of Hurricane Katrina in New Orleans. 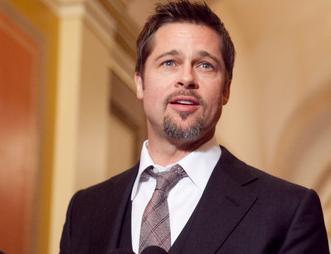 The actor, who was in Washington with his girlfriend Angelina Jolie, who was filming her spy thriller “Salt” in the American capital became the second member of the cast of the “Ocean’s Eleven” to talk to Obama about policy.

Last month, George Clooney called on Mr. Obama and Vice President Joe Biden to discuss how to tackle the humanitarian crisis in Darfur and then announced that they had agreed to send an envoy to the Sudan region.

Brad Pitt, wearing sunglasses, a goatee and a three-piece black suit, was promoting his plan to create safe, cheap “green housing” in the Lower 9th Ward of New Orleans as a national model. He and Jolie set up the “Make it Right” foundation in 2007.

He held separate meetings with Shaun Donovan, Secretary of Housing and Urban Development, and Steven Chu, Energy Secretary, before being feted as a “hero” by Nancy Pelosi, Speaker of the House of Representatives, on Capitol Hill.

The red carpet treatment for Hollywood stars and musicians marks a major departure from the Bush administration’s button-down style and the occasional invitation to a country music star.

Mr Obama has also hosted the 1970s band “Earth, Wind and Fire” and the singer Stevie Wonder at the White House, though not for performances rather than policy discussions.

After his wife Michelle had been treated by Wonder to a rendition of his “Isn’t She Lovely”, Mr Obama said: “I think it’s fair to say that had I not been a Stevie Wonder fan, Michelle might not have dated me.”