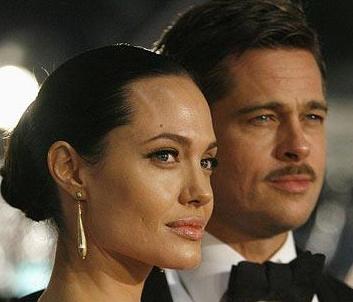 Jane Etta Hillhouse and William Pitt walked the carpet with the couple. Brad Pitt’s father was photographed with his arms around the actress.

Angelina Jolie, who looked stunning in a strapless black dress, certainly played dutiful host when she declined to chat with some reporters, saying, “I have to stay with them.”

Brad Pitt, who looked dapper in a bowtie and tux and still rocking his old-school mustache, revealed that the entire event was designed to channel old Hollywood glamor as he explained: “It’s a movie in the vein of the classics. [It’s a] classic epic, dealing with life and love, and all that fantastic stuff.”

When asked for the clan’s holiday plans, Brad shared: “We’re feeling our way through it.” Angelina added: “I’m very, very proud. Mainly, I have seen everyday he went to work just how hard he worked, how hard the director worked, and Cate [Blanchett] — and just how dedicated they were. It’s been a big process; it’s a very trying film. So, I am just so happy that it came out so beautifully and their work is going to be recognized.”

Brad Pitt also said that he is proud of Button (out Dec. 25) because it’s “in the vein of the classics. He added: “And a kind of classic epic, dealing with life and love, and all that fantastic stuff, so yeah that’s the idea.”