Brad Pitt and Angelina Jolie arrived to huge cheers from the crowd at a rain-sodden British Academy Film Awards in London last night. 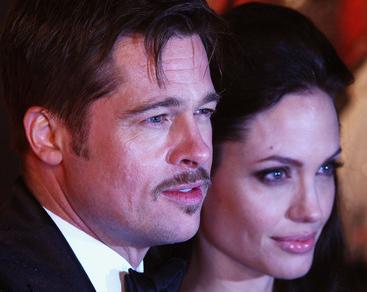 The A-list couple braved the freezing cold and wet weather to sign autographs for ecstatic fans outside the Royal Opera House in Covent Garden.

The pair brought a touch of old Hollywood glamor to the damp red carpet with Angelina Jolie wearing a strapless, floor-length black dress complete with a two yellow stripes.

A dashing, tuxedo-clad Pitt joked about the dismal weather: “It’s a nice change for us… all that sun!”

But the night belonged to the cast and crew of Slumdog Millionaire, which took home seven prizes, including best film.

Kate Winslet won for best actress for The Reader (she was also nominated for Revolutionary Road). She thanked her friends and her parents, who were with her at the ceremony. She joked that she couldn’t look at them or she would burst into tears.

In the supporting acting categories, Penelope Cruz won for Vicky Cristina Barcelona and the late Heath Ledger was named best supporting actor for playing the Joker in The Dark Knight.